In 2003 the kind people at Igloomag did an early interview with me. They have been very generous towards me through the years. Below is the text as it was published. Questions and intro by Pietro Da Sacco.

originally published on igloomag.com, 11 may 2003

Esem is the musical guise of Bulgaria based George Marinov. Over the past few years Esem’s influential sounds have tweaked the ears of many people interested in warm electronic grooves, and his debut 12″ on the (now defunct) DeFocus (UK) record label brought him the much needed attention upon release. Entering the realm of experimental beauty, his Ikae EP sparked visions of casually placed chords, melancholic rhythms and pensive electrical shapes. This was only the beginning of what was to become his debut album, Enveloped also on DeFocus Records. A consistently fluid full-length of delicate frequencies that continually motivates layers of sonic beauty and is probably one of the most under-appreciated albums in the sea of musicians trying to create a similar vibe.

With Merck Records (Florida) close at hand and ready to release Esem’s music, these two credible labels with a similar mission both had intentions of putting out Esem’s debut at around the same time while Merck seemed to have their ears open a little sooner. With all that aside, Marinov’s 2nd full-length, Serial Human on Merck Records shows us that sound can really feel good if treated properly. Almost as if out of thin air, Serial Human manifests itself as one complete entity; Dark and propulsive, melodic and thoughtful. Merck Records’ view of releasing finely crafted electronics certainly rounds off the labels “electronified hip-hop” mandate and launches Esem into phase two of his musical career. With a remix for Machine Drum’s Half the Battle release, a stint with San Francisco based Monotonik and an MP3 track with Suojain (Finland), other material released through Merck, DeFocus and a few others, Esem has a firm view of how he displays his thoughts in the form of cascading electronic content. From precious bleeps to energetic bursts of rhythm, there is a distinct sound associated with Esem.

When asked about his process and inspiration, Esem credits the time when he got his first PC in 1995 and managed to save for a soundcard. With all the music tied into the back of his mind, Esem spent 1996 getting into trackers with no decent results until early ’97, he says. Without having studied the process of music making at all, George concludes that he can’t really tell anything about inspiration in the creation of his tracks. As something too fragile to be safely studied, he allows inspiration to come to him instead: “Inspiration makes the process seem so easy; you don’t notice it happening at all. It drives those nights when you choose to hit the keys instead of sleeping.”

Within Esem’s wide musical pallet, he manages to include some form of infectious and/or emotional trademarks inside of each track. When ask how these emotions are initiated, he explains that he can never describe his own music: “They just emerge after I feel a certain way for about a week or more. It’s a channel to release soul content I guess.” This is remarkably evident on Enveloped where blankets of warm electronic moods shift and tweak with relative ease. But did this release receive the attention it very well deserved? “I can’t really say if Enveloped received a lot of attention. It’s in my view that as a debut it is so subtle I (sometimes) think it went completely unnoticed. I focus on feedback more often. Feedback is what affects me in a good way –doesn’t matter if it’s positive or negative, feedback always kicks.”

With Enveloped having a long-lasting appeal and sincerity from start to end, one has to wonder if George’s environment (Bulgaria) has anything to do with his musical perspective. When asked about this, he’s quick to note that “It doesn’t just influence the music, it almost completely directs it. It’s just the “emotional” sign of the result that is inversed most of the time. Wherever you hear bliss there has been something wrong and vice versa –But not always. It’s some kind of DIY therapy.” Interesting thoughts, indeed. As George Marinov’s vision is directly influenced by his location, this could also be considered a good thing since the results of both Enveloped and Serial Human are quite substantial in the electronic world where maturity in the scene seems to be lacking. 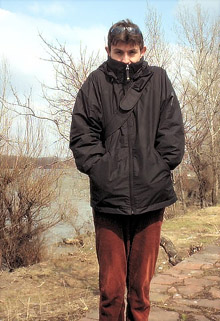 With the advent of online communication, Esem has been able to produce and release music with labels he’s closely tied to but not necessarily close to physically. Has the Internet affected the way he conducts his sound? Probably not, but it certainly is a way to connect with people he might not have otherwise ever known: “..Still, the Internet is quite an alternative. Nothing beats an “IRL” (In Real Life) experience. As you may or may not know, Bulgarians are restricted to travel around the world. A Visa is often required, plus the average costs of a trip are way above the average living standard. Getting to know new people is always cool. Working together with people you’ve never seen has proven to be possible now that the Internet allows it. However, I prefer meeting people in real life, when I can.” It’s unfortunate to hear about the difficultly to travel in Bulgaria when there are so many musicians on the planet traveling across the globe spreading their frequencies with fans in places they’ve never been before. We’re confident that Esem will reach his goal of taking his music globally, performing in a live setting, and in a place other than his hometown. But for now, there are two albums worth of music to digest from this musical master of the melody.

When asked if there’s a relationship between both Enveloped and Serial Human, Esem notes that “Enveloped is Oranges and Serial Human is Apples. In fact I’m not the one to compare them so I wouldn’t really know if that’s possible.” As true as this may be, one can surely hear that both albums reflect a different state of mind and varied musical approach. Whereas Enveloped generated its pulse from the delicate side of the plate, Serial Human displays a darker, more abstract tone. With some tracks from Serial Human dating back to 1997 and some from 2002, the mastering behind this release took exactly one year, often being spoiled in lack of time and concentration.

But what does ‘Esem’ truly mean? Well, we can’t confirm that Esem’s sarcasm is valid or not: “It means “George from Bulgaria” (this answer courtesy of Juho Hietala a.k.a. Blamstrain).” It doesn’t take too long to realize that it’s really his music that setting him apart from the rest, where simplicity is linked to beauty and complexity is glued to fluid rhythms. Without comparing to any other musicians, it’s also safe to say that George has a purpose in life: “I am a human, like everyone else. I believe I am still to find my one purpose in life. For now I prefer to deal with more simple things, like, for example, doing music.” We’re glad to see that Esem will continue with his passion for musical creations and the close relationship between his thoughts and sounds.

Serial Human is a debut (US) release for Esem, an album that treads on a slightly dark tip compared to previously released content: “I think it’s a very personal record. Enveloped was quite personal too, but, in my view, it doesn’t really speak that much. Both releases started from the same point, chronologically, but ended up at different places in time. While Enveloped is more like a snapshot, Serial Human is a kind of real-time recording. It lands on reality and I’ve tried to make it stay low, on the ground. I try not to theorize it so much. I don’t want to end up with a complete philosophy behind it. Either you feel it, while listening, or you don’t.” Emotive melodies and a feeling of wonderment compliment the raw and gritty nature of Serial Human, a trademark worth noting about this Merck CD release.

The current state of electronic music seems to have expanded into several genres. While Esem’s music is a thorough listening experience, it’s the magnetic percussion and emotional focus that makes each piece so memorable. We asked Esem how he felt about the vast number of genres, ideas and concepts that have evolved over the years: “I think there are too many labels out there, and far too many names –The variety of releases might overwhelm people. The broader the taste, the more stuff they have to follow. I personally listen to a lot of music. I don’t really dig deep for ideas; I usually just try to enjoy it. In certain days I shut everything down and stick to my sounds. In others, silence takes over. There are some days in which I listen to my own music mostly. I just go through my tracks and listen carefully; I get to know myself more. In other days I really stop listening to anything –that happens every now and then. The city creates enough noise, much of it so structured, that I don’t feel any need to add to it. Plus, it’s a good rest for the ears.” A definite depth is present within each musical piece, from warm melodic twists to sharp electrical snaps: “The initial intention is always to end up with a good track. I try not to make any compromises when it comes to my own personal quality control. When I like a certain tune I have in progress, I record a snippet of it, and then pass it to several friends to listen to. If, in the meantime I get bored with the track, I delete chunks of it, or completely abandon it in favor of a new one. Often everything comes out naturally so I don’t really get to think about contrast, depth, and how a certain track should evolve. At other times things don’t run that smoothly. I take breaks every now and then.” Esem’s careful consideration in the construction of his tunes is evident at all times, but there is a certain imperfection that manifests itself and this makes for a truly organic experience.

As far as future projects, Esem is currently working on some tracks that would be his next Esem album. The Esem moniker is also reserved for some time ahead, so future Merck and side projects will go under another alias: “The truly attentive listeners have already heard most of what I have to say through the music, because I believe I’ve somehow managed to put enough into it. Many people today perceive music as goods, though, and I’m not good at commercial talk. So I guess that’s it.”

Esem’s signature sound is indicative of his feelings, moods, and thoughts. As some of the most inspirational electronic music around, George Marinov devotes himself to creating tunes that are sincere, emotional and contemplative. As a sound innovator who multiplies the vibe into your mind with each rotation, Esem is a style of its own that is truly worth listening to. With Merck Records’ persistence and dedication to releasing hi-quality electronic music, we’re finally able to see the other side of Esem’s brain. Serial Human forges its way into yet another sector of time where sharp electronic melodies collide with circular beats. It’s a full length that will surely stand the test of time, a release that brings Esem’s musical adventure full circle.

Serial Human is OUT NOW on Merck Records.